The sun was getting low, the shadows long. My own shadow was unrecognizable; however, this shadow reminded me of me, when my head gets too big.

I may have an obsession with cobblestones, their shape, their patterns and the stories they could tell of who passed their way.

Perhaps the same stones, yet viewed a different way–even the streets in Rome resonate with antiquity.

Unveiled in 1667 in the Piazza della Minerva, the Elephant and Obelisk was a commissioned work designed by Bernini outside the Santa Marie Sopra Minerva church and is the shortest of eleven Egyptian Obelisks in Rome.

In the Piazza della Minerva in Rome, round steel balls and barriers with chains protect the Elephant and Obelisk by Bernini.

Barriers, shadows and chains bar entry to the piazza. 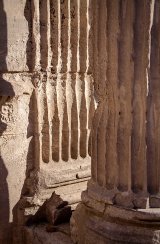 Even with 2000 years of decay, Roman architecture still makes a bold statement, influencing much of the world. 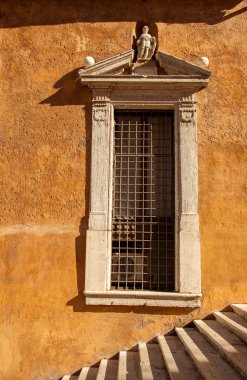 Whether you are looking in or looking out, the setting sun emphasizes the color, contrast and climb to the sacred heights of the Eternal City.

Throughout Rome on many buildings and walls, if you look up, you can see detailed artwork of the Virgin Mary and the Baby Jesus, usually illuminated by a lamp or lantern.

Another example of framed wall art in the style of the Masters. This portrait of Mary is about 15 feet off the ground. Someone has to maintain the flower box.

The stone shelf was empty, except for the bottle which was also empty.

Not sure which language or which beverage, but the empty bottle could be a metaphor for the effects of alcohol.

On a narrow Roman side street, this drinking fountain or water spout had so much character I couldn’t resist the photo. What I couldn’t figure out was if the water was safe for drinking.

From this angle, the water looks pretty good. Throughout Rome, there are water fountains readily available so the weary wanderer should never get dehydrated.

From this angle I’m not sure I would drink the water. However, the fountain is still pretty interesting.

At one point in the distant past it may have been a carriage outside the door, and, the barber may have offered blood letting. Somehow I found my way into the shot.

Brass doorknockers may aid admission through these old oak doors. 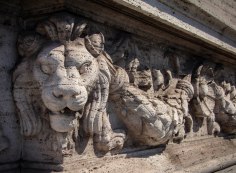 This stone lion stands guard on a bridge cross the Tiber River near the Castel Saint’Angelo. 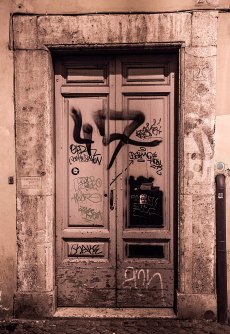 We wandered down a narrow alley in the bleached out color of night, looking for the Spanish Steps. The Graphiti said we were lost.

In one man’s Roman trash, you might find a designer zebra stripped suitcase for a reasonable price.

Cell phone service in Rome was frustratingly inconsistent. When we saw this icon for the local provider, I realized why. Their phones are rotary.
41.892916 12.482520