Fatima scowled as she handed a steaming cup of mint tea to her sister. Jamila accepted the tea as Fatima settled her bones on the river bulkhead.

“I am not so old as you, sister,” Jamila said, sipping her tea. The tea fragrance carried them back to fall harvest in their mountain  village. As young girls, Fatima and Jamila had worked long hours in their father’s fields.

Now, fall was gone and the damp winters of Rabat pained Fatima’s arthritis. They sat in silence, sipping their tea as the green black waters of Bou Regreg sludged past.

“I do not know why we still come here,” Jamila said.

“Because our husbands do not like it,” Fatima replied and they laughed. There are few satisfying rebellions for a Muslim woman and Fatima and Jamila practiced them often.

“What did the doctor say?” Jamila ventured.

“Youssef is too stubborn to tell me,” Fatima said. She savored a sip of tea. “But I know.”

“You are too modest, little sister.”

A gusty breeze fluttered the silks of Jamila’s hijab and she drew the scarf tight under her chin. “Mamma had a remedy for such things,” Jamila said, not looking at her sister.

“I know,” Fatima said. “I have been mixing the herbs with his breakfast meal for weeks.

“You have?” Jamila looked up at her sister, eyes wide.

“What our men don’t know…,” and the sisters giggled as girls.

“Has it helped?” Jamila asked and the women laughed again.

“Shush,” Fatima said. “The Imam will see us laughing.”

“As will the All-Seeing-Eye.”

Fatima shivered in the moist river air as the culture of silence settled on the women. She sipped her tea as a lone seagull squawked above.

“How does Saïd at University?”

“Good. Good. He’ll be home in another month.” Jamila watched a fisherman rowing a worn wooden boat against the current. “And how is Asmae and the babies?”

“The babies are noisy, and hungry,” Fatima smiled. “I love having them here. Asmae says that Hakim wants her to come home.”

“She must rest, and feed her little ones.”

“So says the Prophet.”

Jamila took a sip of her mint tea and frowned. “My tea grows cold.”

Fatima and Jamila both twisted their bodies and stood up as old women. When the  Adhan call to prayer echoed across the river they looked up to the minaret.

“The Muezzin is in good voice today.”

“He always sounds good on those days when we aren’t required to be there.” The sisters exchanged guilty smirks.

“You bring the tea.”

They smiled and embraced.

The mournful Muezzin’s call echoed across the cobblestones as the sisters plodded toward home. 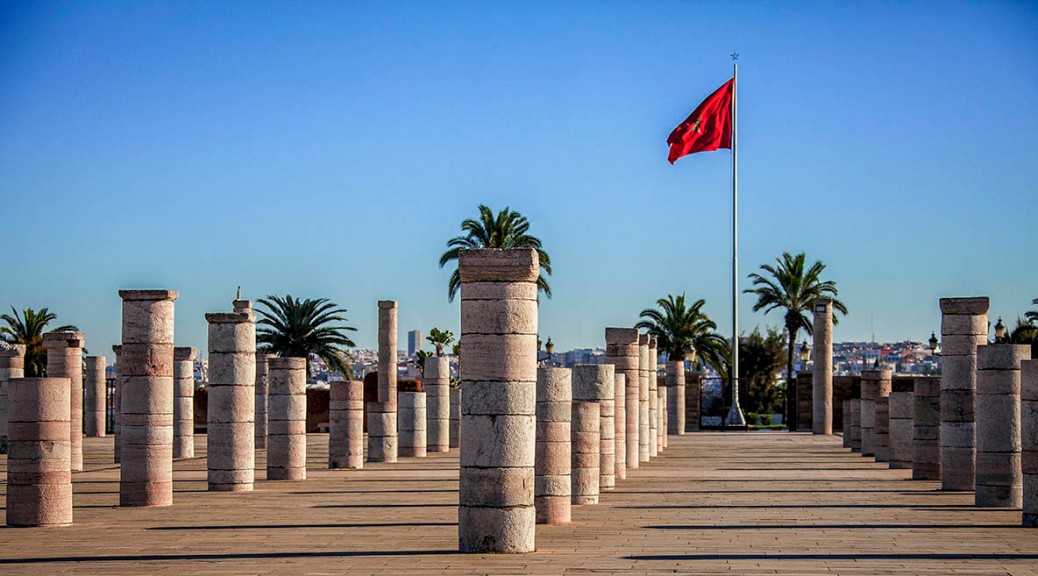 On assignment, I flew in to Rabat, Morocco, on a private jet. As our team proceeded through customs, the agents held us up.

Moroccan media is tightly controlled and monitored by the Government. King Mohammed VI takes a personal interest in the message of his country. Foreigners can’t be trusted to portray an accurate or truthful picture of life in Morocco.

Rabat is the capitol city of The Kingdom of Morocco. Casablanca, made famous by the movie, is the country’s largest city. For more than a thousand years, the Western Kingdom of Morocco, or Marrakesh, was a powerful African dynasty.

Morocco is one of only three countries which have both a Mediterranean and Atlantic coast. From the 16th through 19th centuries, Barbary Pirates attacked ships and traded slaves along the Berber Coasts of Morocco, Algiers, Tunisia and Libya. In 1805, the United States executed a marginally successful military action against members of the Ottoman Empire in an effort to destroy the pirates and free American slaves.  With European colonialism seeking to dominate much of Africa, political and economic tensions grew during the latter part of the 19th century. Moroccan independence essentially ended when France signed a treaty designating Morocco as a French protectorate in 1912. The French governed Morocco until 1956 when Sultan Mohammed V successfully negotiated Moroccan independence.

With Mohammed V’s succession to the throne, the spirit of independence and the power of the Monarchy re-emerged in Morocco. Mohammed V ruled for just 5 years. His son, Hassan II, became king upon his father’s death. Hassan II died in 1999 and his son, Mohammed VI, ascended to the throne.

As King, Mohammed VI has implemented progressive changes in Morocco, adopting a new constitution reducing the overall powers of the Monarchy while implementing a Parliamentary government with an  appointed  Prime Minister. Yet, Mohammed VI still wields tremendous power and controls much of the country’s resources.  He personally owns the country’s phosphate mines, which account for 75% of the world’s reserves and he has a net worth greater than the Queen of England.

According to the World Health Organization, poverty remains high in Morocco. While Mohammed VI has placed modest emphasis on reducing the widening gap between rich and poor, civil rights abuses, government corruption and economic distress account for an increasingly disaffected populous. On the world stage, The United Nations has criticized Morocco for military action and occupation of a Western Saharan region populated by the indigenous Sahwari people who claim Western Sahara belongs to them.

As we stood in the customs office, the agents explained that we could not bring our equipment into their country. We must return our equipment to the airplane or we would not be allowed to enter. So, we shlepped our heavy black pelican cases back out on to the tarmac and stowed them on the plane.

I keep a camera in my backpack.

Politics and customs agents aside,  a highlight of my visit to Morocco was eating lunch at a traditional restaurant which required ritual hand washing before eating.  I held my hands over a beautiful ceramic basin as the Maitre d’ poured warm water from a hand painted glazed pitcher. Another waiter provided a warm towel to dry with. I don’t remember much about the food, but, as we were leaving the restaurant, the Maitre d’ repeated the washing experience by pouring warm rose water over our hands. The scent was strong and pleasing and stayed with me throughout the day.

Now, when I catch the scent of roses, I am transported back to that tiny restaurant in Rabat. I hear the call to prayer echoing across the ancient city and I want to reach in my backpack and check to see if my camera is still there. 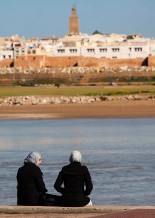 Two women pause for a moment of reflection on the banks of the Bou Regreg River in Rabat, Morocco.

In the 10th century, guards of the Almohads could look out over the mouth of the River Bou Regreg from the parapets of the Kasbah of the Udayas and watch for invading armies.

In Rabat, Morocco, beautiful gardens have been restored to their former ancient beauty inside the Kasbah of the Udayas.

There are several ways out of the Kasbah of the Udayas in Rabat, Morocco.

The Moroccan flag flies over the palace grounds of Mohammed VI, King of Morocco.

Back alley shops are common in Rabat, Morocco, where Mom and Pop wait for customers.

Built in the 10th Century A.D.,cannons of the Kasbah of the Udayas in Rabat, Morocco would fire on Barbary pirates as they sailed up the Bou Regreg River.

An alley market in Rabat, Morocco boasts a wide variety of merchandise.

A lone man watches the waters of Bou Regreg river for signs of fish, while empty boats rest on the opposite shore.

The town of Salé rises across the river Bou Regreg from the capitol of Rabat, Morocco.

Birds carve out ideal homes in the ancient Hassan Tower of Rabat, Morocco.

Imperial symbols adorn the marble floors of the Mausoleum of Mohammed V in Rabat, Morocco.

Moslem women rest on stone benches outside the Palace of Mohammed VI in Rabat, Morocco.

A Moroccan woman rests on the painted iron grate overlooking the tower of Hassan in Rabat, Morocco. 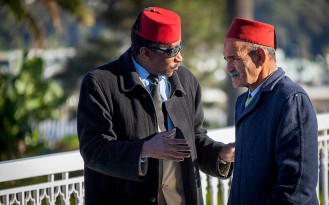 Two Moroccan men discuss the matters of state, outside the palace of Mohammed VI in Rabat, Morocco.

10th century Moslem influences inform the architecture and staff of the Mausoleum of Mohammed V and the Palace of Mohammed VI.

The official flag of the Kingdom of Morocco. 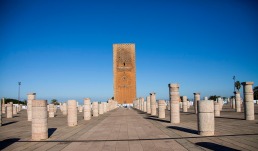 Built of red sandstone in the 10th century, Hassan Tower in Rabat, Morocco, was intended to be the tallest minaret in the world.

Signs and flags everywhere indicate that the official name of the country is The Kingdom of Morocco.

The official flag of Morocco flies over stone pillars, remnants of the walls of Hassan Tower, in the palace court of Mohammed VI, King of Morocco. 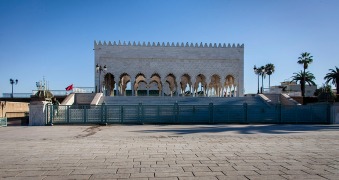 The Mausoleum of Mohammed V is the resting place of the late King of Morocco, along with his two sons, King Hassan II and Prince Abdallah. 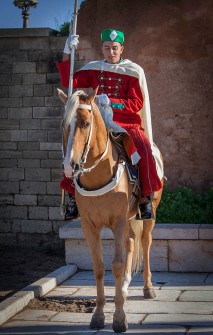