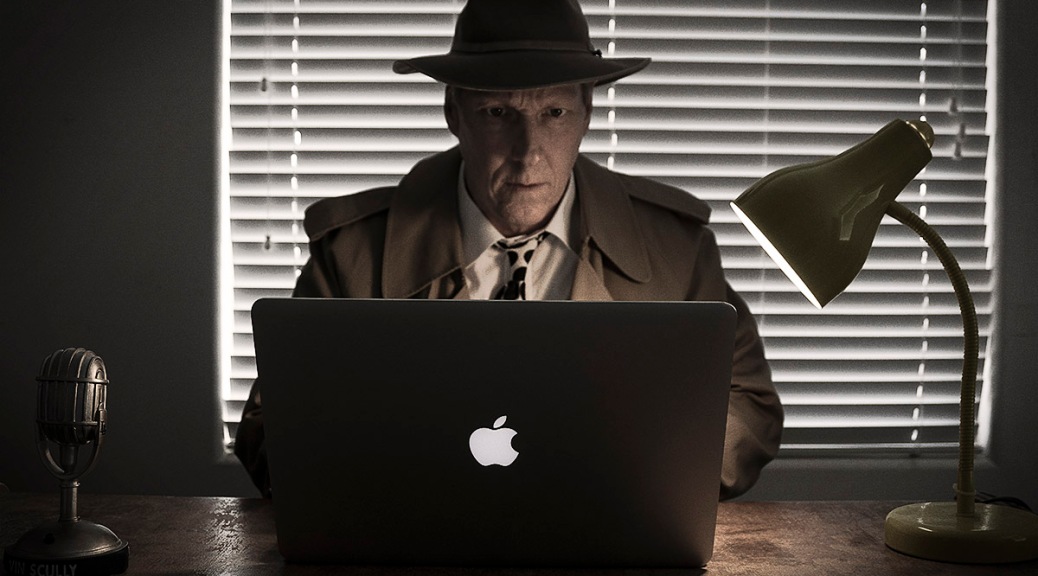 So, I’m starting a flash fiction noir episodic (forgive the cheesy self-portrait:). Each episode will be under 1000 words. I’ll post one episode per week, until the story ends. Writers block began the inspiration for this story. I’d love to hear your feedback, comments, questions, and thoughts. If you’re a writer, you may relate.

THE MUSE
by James Dalrymple

Jeff Baxter leaned back in his comfortable leather chair and stared at the laptop on his desk. His eyes glazed. He was uncomfortable. The chair was too soft. His wife had arranged his home-office. She said it was for maximum creative output.

She was an interior designer.

He didn’t like it–the office. She took out all his books. Now, he was surrounded by post-modern Ikea. It was supposed to fuel the imagination. It didn’t. Clean lines and smooth surfaces seemed to reflect his thoughts, not encourage them. It was all they could afford. Jeff liked clutter. He loved books. His old office had both.

“Come on,” he said, in frustration. He took his eyes off the blank screen and looked across the room. A sultry woman crossed her legs and smirked at him.

Jeff didn’t like being called Jeffrey. His mother called him Jeffrey when he was in trouble. He’d been in trouble, a lot.

Their eyes met. Now, he was really in trouble. Jeff knew she was dangerous.

“What are you waiting for, then?” She leaned back into the leather couch, her low-cut short skirt revealing more than Jeff wanted to see. He was trying hard not to look. She knew it, and laughed again. The sound was like music. He could see the notes, but not the words.

He knew she was teasing him. Even from across the room he knew she could sense his desire, his need. He hadn’t written anything important in a long time.

She leaned forward and the leather couched groaned, in ecstasy.

Jeff put his fingers on the keyboard.

“It was late, when Geoffrey Stone entered her apartment.”

“Jeffrey Stone? Are you kidding?”

“That’s Geoffrey with a G.”

“Just because you spell it with a G doesn’t mean it isn’t me.”

“You think every story is about you. Don’t you?”

“What do you mean, ‘you’re not sure?’ Whose story is this, anyway?” Jeff was exasperated.

The door to his office creaked. His wife was standing there. Jeff looked up at her. His checks flushed and he looked over at the couch.

He looked back at his wife. “Yeah,” he said, sheepishly. He could feel the heat radiating from his face. “I was… I was just…” He didn’t know how to explain it. He couldn’t. He didn’t think she’d understand, anyway.

“I don’t want to be late,” she said. He couldn’t read her expression. He hoped it held compassion.

“I’m ready. Let’s go.” Jeff slapped his laptop shut and followed his wife. As he closed the office door, he could hear laughing. It sounded like music.

2 thoughts on “The Muse”